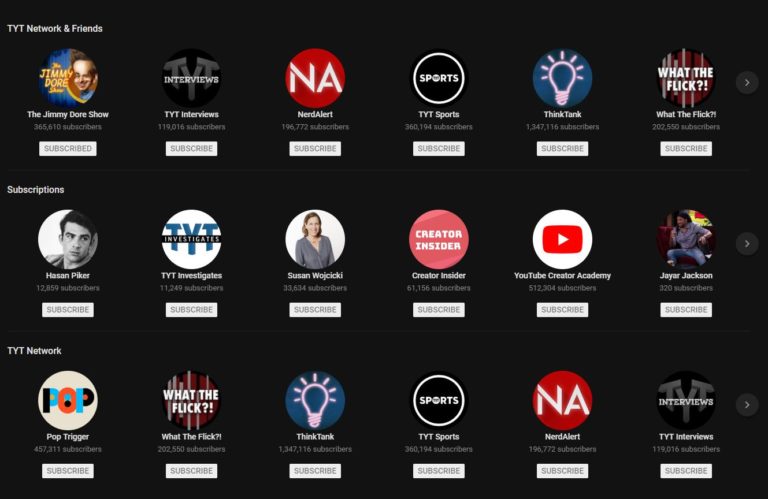 An open letter to the staff of TYT. Here’s why I stopped paying for your membership after years of service.

I’ve been a normal viewer of The Young Turks since 2008. I became a paying member around the time they stopped showing the show on a 24 hour loop for free. While I believe it’s impossible to agree with someone 100% of the time, I loved the fact that TYT had various people with differing viewpoints and opinions. Of course, they were mostly on the progressive / liberal side of the political spectrum, but they still debated and actually cared about the issues.

The number one reason I started paying for The Young Turks membership ($10 per month) was because they stopped running the show on a loop 24 hours a day. I was one of the few viewers who would catch their show on a loop at theyoungturks.com, before it became tytnetwork.com. Believe it or not, theyoungturks.com still does not redirect to tytnetwork.com. They’ve always had horrible tech support and business planning. I’ve offered my services to them a number of times, but they usually stick with the people they know and sometimes even result to nepotism. I enjoyed having a back and forth with other members, even though the website had many face lifts and comment system changes. The first change to wordpress looked like something someone did for free within a week, and I remember them saying they were waiting months for that change. I bet they paid an arm and a leg for it. But I digress.

Not only has their tech support been lousy, but so has their social media. I’m under the impression that very few people actually do tech, social media, or actual back door support stuff at TYT. It’s been said in the past that Dave Koller was the person doing almost all the behind the scenes work. Honestly, TYT has been running itself way too thin. They should focus on what they’re good at and actually do well. No more TYT Fashion, Pop Trigger, TYT Sports, What the Flick, Nerd Alert, The Point, etc. While I know it’s important to put some pop culture topics to pay for the serious topics, is spreading all this out over so many channels necessary? Are the other channels actually doing well? Do we need a separate channel for interviews instead of just putting them in a playlist on The Young Turk’s channel? Same goes for TYT Shows. I don’t want to hate on their missteps, but their actual successes too! The Jimmy Dore Show started out alone on TYT Comedy, a number of other comedians came and went, and then they made it the Jimmy Dore Show all by itself. There used to be a channel called TYT University, which later morphed into Think Tank. Those two channels focused on what they did well and exploded almost independently because of Jimmy Dore and John Iadarola with their respective channels.

It’s not just the disorganization that has me upset, however. Over the past two years the Young Turks have gone down a terrible, mainstream liberal path. I remember days when Cenk Uygur would say things like, “we won’t take money if they make us change our opinions or our show.” He even quoted Benjamin Franklin’s writings regarding sponsorship for his newspaper. These days TYT is very reserved, and even stop themselves from cursing, on the internet, in 2018, on a political program that no children will ever want to watch or listen to.

Bad language is still just a small issue, but when the actual conversation changes then we should all start paying attention! I noticed how the main show changed because Donald Trump became president. I’m not one of those stupid people who say “Ha ha, liberal tears!” because anyone who backs a person with no political background for president of the United States obviously doesn’t know what they’re doing. Regardless, The Young Turks went for Trump’s throat in ways that weren’t necessary and turned off viewers. While others on their network, such as Jimmy Dore and Brett Erlich, will give Trump some breathing room and even push back on the basket of deplorables comment, the main TYT show brings up many Trump non-stories. We’re subjected to so much nonsense that doesn’t matter in terms of actual politics. It has surpassed the level of Bill Clinton and Monica Lewinsky, and almost reached the level of the “Thanks, Obama” meme. Not only that, but they believe almost everything Trump and his team does is because of Russia. This is almost the same as the right yelling “Benghazi!” Still, these are just small changes. Some would use the frog in the boiling pot analogy here, but there were actually two big events recently that made me say goodbye.

The first event happened with Jordan Chariton. After so much big talk about Democrats being weak, politicians being screwed over by random sex scandals, and reporters bowing down to the establishment, some news came out regarding their reporter Jordan Chariton. Allegedly, Jordan Chariton was involved in sexual assault, which he has fully denied. There was no suspension or investigation, they just fired him. For those that don’t know, a few years back The Young Turks held a huge fundraiser to pay for their own investigative journalists. They wanted to break their own news stories, and Jordan Chariton helped break quite a few. I guess the TYT staff didn’t have any journalists looking into the journalists they hired.

The second large event was revolved around the Justice Democrats. I’m not entirely on board with a separate wing of an already corrupt party. I think it’s better to create a third party, but that’s my own opinion. The real issue came up when they kicked Cenk Uygur and Dave Koller out of the party. Cenk Uygur was one of the people who helped found the Justice Democrats. Once news came out about some sexist articles he wrote many years ago, Cenk bowed his head and left silently.

Remember, I’ve been watching for over ten years. I heard Cenk many times say he can’t run in politics because he’d talk so much shit, break necks, and drink spinal fluid. But actions speak louder than words, which is why I’m no longer paying for TYT Membership. It can be said that these quick reprimands were due to so many women finally speaking out against former bosses. While there are actual cases that go above and beyond acceptable, others can sometimes get caught in the crossfire, and liberal outlets will quickly throw people under the bus instead of fighting when it comes to select topics.

With all this said, I am glad that people at the Young Turks have actually taken steps to do something legitimate instead of just crying, such as forming the Justice Democrats and Wolf-Pac. I’ll continue to watch clips of TYT here and there while supporting other members of the TYT Network