Update on My Japanese Studies (July 2014)

I’ve been studying up on Japanese for awhile now. Here’s a quick update.

It’s been about a year and a half since I started studying Japanese. I’ve been primarily using Rosetta Stone to study, but I have studied up a bit using a few Japaneses websites. Rosetta Stone has three levels of Japanese. Each level contains four units, and each unit contains four lessons. I’m currently on Level 2, Unit 3, Lesson 1 of Rosetta Stone Japanese, which means I’m about half way through the entire Japanese series on this program!

I definitely don’t feel like I’m half way through my Japanese studies, unless Rosetta Stone really ramp it up towards the end. I’ve learned  a ton of vocabulary, but I still have trouble forming sentences on the fly. Then again, I feel that way with English. I can understand pretty much everything that’s being said in the lessons, and I understand quite a bit in anime now, but speaking is a different story. I haven’t exactly been practicing with other people. I do talk with some friends from Japan at times, but we usually talk in English. I have spoken to them using Japanese here and there, but nothing significant. 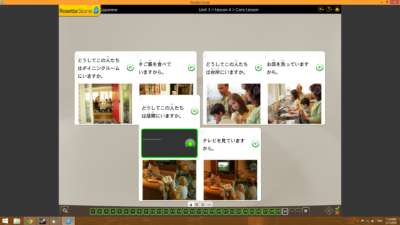 I guess I have the most trouble with grammar and memorizing all that Kanji! Of course, it will take a long time before I can memorize 1000s of Kanji. I have seen some Japanese lessons using the Nintendo DS. I believe one game is called “My Japanese Teacher.” You can use the bottom touch screen to learn how to draw hiragana and katakana, and you can use the mic to practice speaking Japanese! There’s also a DS game to learn some Kanji. I’d like to get those games some time soon to help supplement my lessons.

I’m almost certain I’ll have to study even more after I finish all three Japanese levels of Rosetta Stone. If I stay on this same track, I should be finished by Christmas time of 2015. Hopefully I’ll know enough Japanese to make a trip to Japan and speak to the residents. I’ve wanted to go there since I was a kid! It’d be great to meet up with some of the friends I’ve made online. I may take some college Japanese classes after Rosetta Stone if I don’t think I can learn any other way. Maybe I could get a degree in Japanese. I think it may be fun to become a translator. I may even pick up Spanish again! Is anyone else learning second or third languages?