It’s almost birthday time, but not for me. It’s Cry Baby Salem and Mr. Whisker’s Birthday!

For those of you who don’t know, Salem and Mr. Whiskers are two of my cats. I picked up a stray cat over a year ago, and she ended up getting pregnant by all the cats around the block. She had seven kittens on July 30, 2011. I gave all of the kittens away except for two, a black cat and a calico cat. The black cat (Salem) is the only male animal I own, and I have a ton of animals! Despite her name, Mr. Whiskers is actually a girl. The mother’s name is Mr. Kitty, so I thought it’d be cool to name her daughter “Mr.” as well. She also had huge white whiskers on her face when she was a baby. She still has white whiskers, but her face grew into them. 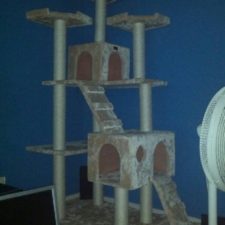 For their birthday, I bought them an awesome cat house. All the cats that live here use it from time to time, when they don’t sleep with me, that is. If you’re asking, “Why buy your pet a birthday present?” or “Why celebrate your pet’s birthday?” I ask you a question in return: why not? I don’t understand why people think an animal’s life is so much lower than any other person’s life. They make you just as happy, angry, or depressed. They’re like members of your family. And no, I’m not some lame vegan or anything.

Cry Baby Salem and Mr. Whisker’s even have their own theme song! Most of my animals have their own little theme song, but I haven’t shared them all with the world yet. Check out the videos on YouTube with these two. They have a bunch of pictures during the theme song, and the rest of the video is just them messing around. I need to upload some recent pictures or videos of them. They’re really big now. They’ve even gotten bigger than their mother! Oh, and if you’re wondering why I call Salem “Cry Baby Salem,” it’s because he’s a big whiner. He’s definitely earned the nickname.

Quick note: I made the mistake of saying their birthday was last month on June 30th when I posted on Twitter. It’s actually this month on July 30th. My bad, I had a lot of things going on.