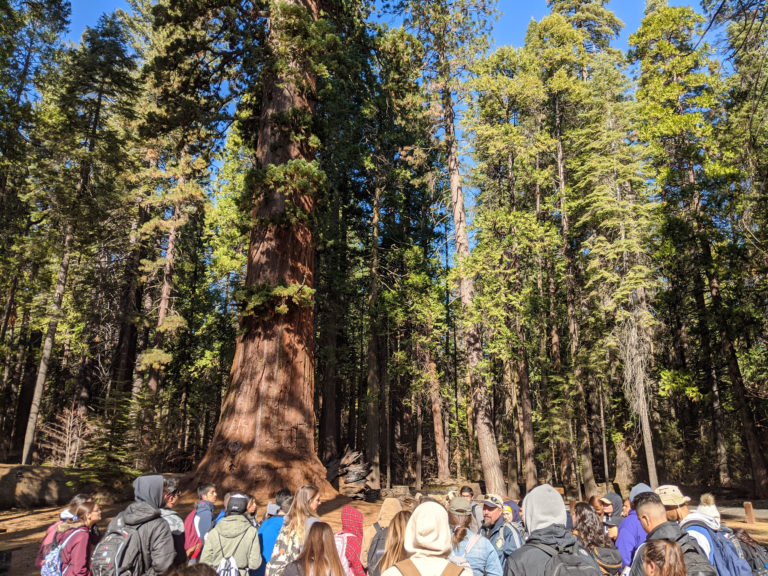 In November of 2019 I was registered to a Life Biology course at San Joaquin Delta College. One of the requirements was a field trip to explore the various parts of life in this region of California. At the time I was still dealing with a lot of anxiety, but I powered through because I wanted to experience it myself, not through pictures and videos. Although the bus ride was nauseating, and there were fewer forms of wildlife than I expected, I still had a wonderful time. Below is part of my report that I submitted to the class on my trip, along with three stops towards Calaveras Big Trees State Park.

A natural levy could be seen in the distance. The turkey vultures were huddled near each other at the tops of various trees, attempting to stay warm as the sun rose above. These were massive birds that live up to their name.

The trees were large and surrounded the river beds, but most of the leaves had fallen for the winter. The group also spotted a tree filled with holes and acorns. Upon further inspection, we spotted a woodpecker busily creating more holes to store his acorns.

The Mokelumne River flowed with some force, but the salmon continued to push upstream and would even jump out of the water from time to time. More birds could be found near the river’s edge. One bird was very different from the others, being white pure white and thin.

Further upstream was the Mokelumne Fish Hatchery. There we saw baby Salmon in shallow pools. The massive adult Salmon were jumping up the fish ladder with all their force.

The soil in the area was an orange-red, similar to rust. It reminded me of the surface of Mars. Holes were dotted throughout the side of the hill, most likely homes for gophers. This was my least favorite place, and I was constantly worried about finding rodents or parasitic insects. Honestly, I was most surprised to learn that we have a state rock that could be found in this area.

We didn’t see any animal life in the area other than birds above, though we could probably find some if we attempted to go into the thick chaparral. Thin, dry shrubs and weak-looking trees were scattered around the area with wax-coated leaves to retain water. One of the trees grew tiny berries and had incredibly smooth bark. These berries were actually edible!

The grass was very dry and dead due to it being winter. A fire could easily spread throughout the area, and commonly does along side the dried brush. Thankfully the plants have adapted to the usual wildfires.

This area contained a large, man-made body of water. The water was very calm and did not flow like the Mokelumne River from earlier. As we moved closer to the Calaveras river, larger trees and wildlife could be seen; in fact, we spotted a group of Deer as we drove to our stop. They were kneeling / laying beneath trees in the dry grass. The trees were mostly dead, but the lichen and mistletoe growing on the trees themselves remained green and alive.

Similar to the previous chaparral area, the grass here was dry and dead due to it being winter, and some shrubs were dotted sparingly away from the river.

I came across a large tree with unusual pink flowers a few feet from the river. These flowers were something I had never seen before. I took pictures of these flowers for reference. When I got close, I heard a loud buzzing noise, but I wasn’t able to determine where it came from.

The area was incredibly cold unless we stayed in the direct sunlight, which was tough because of the massive trees reaching into the sky. I thought to myself, this is how insects or rodents must feel as they walk beneath the common trees in our city. The area below the trees was dry, cold, and dead with a massive amount of pine needles.

Not much wildlife could be seen throughout the trail, but I did spot a squirrel near the bridge as we moved to the picnic area. It was standing so still as the Professor and several other students passed by, I thought it might have been a statue or stuffed squirrel. As more students moved closer, the squirrel quickly climbed down the stump into the dried canal. We sat down to eat lunch in the picnic area a short distance down from the parking lot. As we were eating, the group heard some unusual squeaking sounds nearby. It was most likely the squirrel from a few minutes earlier.

We spotted spider webs and even one tiny brown spider that looked exactly like the male pine cone it was on. Unfortunately I didn’t get a picture of this because I quickly swiped it back into the dirt. It was previously on our picnic table while a group of us were eating, and I didn’t want my classmates to panic.

The trail was far more devoid of animal life than I had expected, probably because of the large amounts of people that traverse the area. Once the group stopped walking and talking, the area was eerily quiet. Of course, the plant life didn’t care about humans. The trees continued to grow very tall and drop seeds that sprouted into saplings. However, some of the baby trees weren’t able to get enough sunlight and became yellow and dreary.

The older trees that had fallen were still decomposing from hundreds of years ago. They have become smooth and hard, and many people had carved names into the sides. Other trees had been hollowed out, and were so big that we could walk through them while barely crouching. People must go through them on a regular basis because we didn’t run into any spider webs inside.

The trunks of the trees in the area differed from each other. Some were very rough and thick, and some felt furry and hollow. Large chunks of bark were discarded along the trail among the dead pine needles. This recipe is perfect for fires, and some of the larger trees were charred from fires that had previously been started in the area. Regardless, the trees continued to grow with blackened sides. I even found soccer ball-sized chunks of charred wood on the ground.

When my lab partner and I reached the end of the trail we heard a woodpecker near the top of the trees. We were unable to spot it since the trees were so tall and the branches were still green and thick enough to obscure our vision.